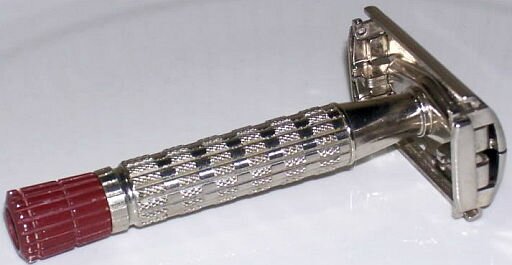 One of the features of the real shaving community is people posting to forums saying what they had used for their shave that day. Now, these are interesting in that they reveal the infinite variety of experience that is to be had out there, they give some great ideas for emulation and they portray the sheer fun and joy that is to be had from this simple daily activity.

One of my rules is that I will only introduce one new element at a time to my shave. This is to stop my simple brain being confused by which things are doing what. So this morning I had the three new T K Maxx purchases from yesterday. But I also had my “new” 1956 Gillette Red Tip (which has been boiled and disinfected). No competition really, it has to be the Red Tip.

I have shaved with Gillette Super Speeds before. My father had one when I was a kid which I, obviously, experimented with. But the fabled Red Tip is a different matter. This legendary razor has a fantastic reputation as a shaving tool. But it is also known for its aggression. Supposedly a real man’s razor.

So in went an Iridium blade, very easily with the twist to open (TTO) butterfly head. This blade makes a very good reference which you can compare everything else to. Then, after making sure that the stubble was thoroughly waterlogged, it was on with the Cella Crema da Sapone using a Trumper’s super badger brush (which could well be a Vulfix). Standard, good quality components.

The Cella smells fantastically of almonds, like marzipan. And I approached removing it’s lather with considerable care, such is the reputation of the Red Tip, just enough pressure to keep the head attached to my face. The razor makes a fantastic noise as it scythes through the hairs, you can really hear it working. And it is very sensitive to head angle, just a small change and it wasn’t shaving.

After the first pass I rinsed my face and it was nearly job done, such is the power of an aggressive razor. So for the second pass I only lathered up the parts of my face that needed a bit more. Once again the minimum pressure was used and after a rinse that was it. A good close shave. And difficult bits, like the goatee section just under the chin, are just perfect.

All this with zero blood. Not a single little drop. No nicks, no weeping. So the fearsome Red Tip is a kitten if you treat it with respect and take care over your technique. And the final test, SWMBO was asked for her opinion. And the verdict: “very nice”.