Here on the interwebs there are very many reviews of shaving products by consumers, in fact some websites actively encourage this by having dedicated areas for such content. You would think that these would be really useful, but experience has taught me that they are often pretty useless as a source of information. The first problem is that many reviewers are glowing in the ownership of some shiny new kit, so all you read is this glow. The second problem is that many of the reviewers are writing about their only razor or only brush, they lack the subjective and objective knowledge to write anything meaningful that bears any context. It doesn’t stop them though.

Against this background came a trip to the upmarket British supermarket Waitrose, where there was a variety of stuff on display including Durance L’ome Bol & Savon A Barbe A l’extrait d’Argousier. This has received some very mixed reviews and as it was only £5 it was worth the risk to find out. The product is beautifully presented in a brown cardboard box containing the white ceramic bowl within which is the very white hard soap. 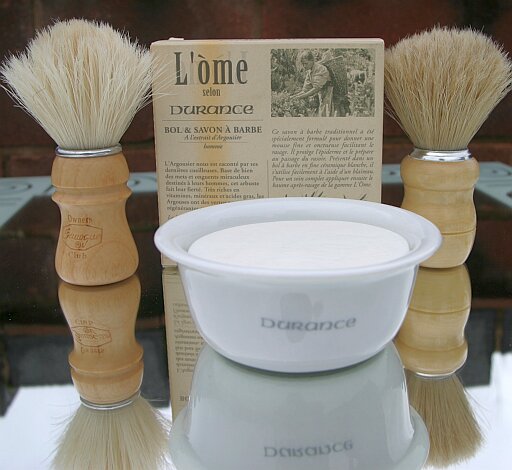 To give it the best possible chance and having experienced other hard soaps that can sometimes be temperamental a few drops of water were put on the puck a few minutes before starting to shave. Then to further help it perform well  the Turkish horse hair brush was selected. In the shower the brush loaded nicely with lots of product which then worked up into a fine Father Christmas lather on my face. I then turned to put the brush on the rack and when I turned back the lather had gone! Just totally collapsed. After struggling through the first pass it was time to massively load the brush with more soap only to get the same result. And again for the third pass. Not good.

Day 2 it was time to get extreme and the puck was left to soak in the sink for five minutes or so before being put into its nice bowl, which was then filled up with water, to be drained just before use. The brush this time was the Semogue Owner’s Club, another brush that should make any hard soap perform well. Once again, for the first pass, the brush was heavily loaded and created a fine Father Christmas that promptly collapsed. Time for drastic measures. For the second and third passes the slimy puck was directly rubbed on my face till it was white with the soap, this was then made into a very thick creamy lather with the brush, which again promptly collapsed as far as it could. 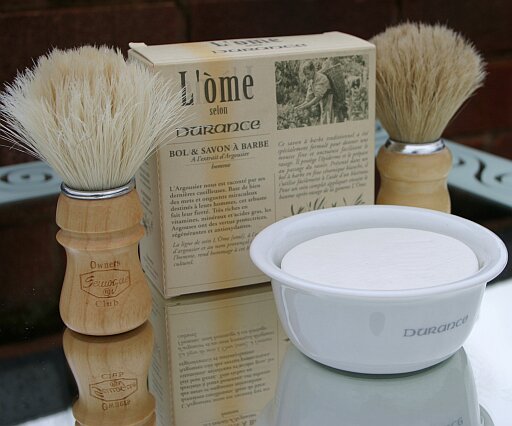 All this wouldn’t matter if it lubricated the shave. But it didn’t. My superb razors felt decidedly average and afterwards I felt like I have sensitive skin, which I don’t. And the shave wasn’t very good either.

Overall this product is like some artisan soap makers create, just add bentic clay to an ordinary soap and call it a shaving soap, even though the lather collapses. The Durance is like this but without the bentic clay to give it lubrication. In my opinion it is easily the worst shaving soap or cream that I have ever used, totally unsuited for the job of shaving, it will now be used for washing my hands, let’s hope it can at least do that. All IMHO and YMMV of course.

What makes this very sad is that there is a brilliant French shaving soap, Monsavon Bol A Raser, that Waitrose could and should sell in Britain as it is totally unavailable here. And it is a lot cheaper than the Durance.

And I had a narrow escape, Waitrose also were selling a Durance badger shaving brush for £10. If the shaving soap is anything to go by I could have wasted three times as much money.

Previous Post: The Marketing Powerhouse that was and still is the Gillette Safety Razor Company, part 3
Next Post: Marilyn Monroe and Elizabeth Taylor shaved their faces