The vanity of the world’s women leads them to spend billions of dollars every year for grease to put on their faces (and other bits of their bodies). They will happily pay out $30 dollars for a small pot of grease that costs cents to produce in the belief that it has some sort of magic effect on their appearance. A woman and her money are easily parted when you employ the vanity mechanism.

The profits on this grease are so vast that the manufacturers can pay for ridiculous amounts of advertising. We are bombarded with it. And this advertising promises women the world. Often falsely. National advertising standards are kept very busy trying to discipline these claims and punish the very many instances where they owe more to fiction than to fact.

Against this background, amazingly, there has emerged a grease that actually works and does what is claimed for it. Boots No 7 Protect & Perfect anti-ageing face cream has been scientifically proven to do what it says on the bottle. You would wonder why women are now buying any other brand.

So what has this got to do with shaving? Well Boots, without any fanfare, now make a range for men using the same technology. So now we have an after shave balm that makes us look younger! Which is something that some of us may want. The No7 for Men Protect & Perfect Intense Anti-Ageing Moisturiser currently costs £22 for 50ml here in the UK, which compares well with the fancy prestige global brand names. However the Boots product does something that theirs can’t. 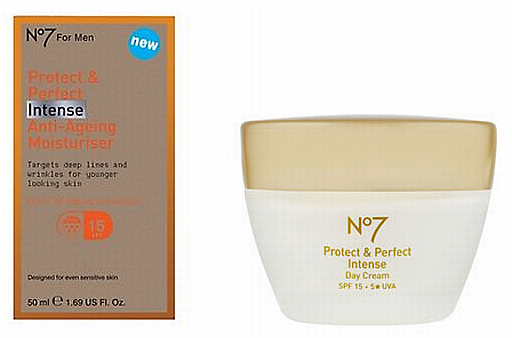 Previous Post: Otoko Organics Wet Shave Essentials
Next Post: The Marketing Powerhouse that was and still is the Gillette Safety Razor Company, part 4