I just opened a parcel from Los Alamos, New Mexico and in it are two fantastic, classical Gillette razors to add to my collection. These Gillette razors are fantastically engineered and beautifully made. With a re-plating every 50 years or so they are something your great grand son will hand down to his son. They are made of solid brass plated with nickel. Modern chrome plated razors are often made of pot metal so are weaker and can corrode rapidly once the chrome is worn through.

They are also going up in value very rapidly indeed, they aren’t being made any more and every real shaving enthusiast wants one, or more. Some of the most famous models only had a very short production life. Demand is exceeding supply and it will only get worse as real shaving grows in popularity.

I am not an expert on this but here are some of the models to look out for:

The Tech. This is a simple three piece razor. Handle and two part head that screws together. It is the cheapest and most common model and was made in many variations over something like 50 years. This is a mild shaver. Some people build up big collections of Techs because of their variety and availabilty.

More sought after and rarer are the various Super Speed models. These are one piece razors with butterfly doors and a twist to open mechanism (TTO).Look at the bottom of the handle (the tip). Original models had a straight tip. Later models a “Flare Tip”. Later still smaller numbers were made with these tips painted different colours to signify how aggressive the razor is. Blue tip, for instance, is very mild and considered to be a bit of a ladies razor. The much sought after red tip is more aggressive and is considered to be a real man’s razor.

Further up the pecking order are the adjustables which allow you to dial in aggressiveness. The two main models here are the Fat Boy and the later Slim. If you use one of these remember to slacken off the TTO mechanism before using the adjuster.

There are also a number of prestige models such as Aristocrat and Executive, they also gold plated small numbers of some models.

So back to my parcel #3 in the photo is my Red Tip, it is date coded B2 which means it was made in the second quarter of 1956 and it is in fantastic condition, it cost me $18. #12 in the photos is my new flare tip, this is much younger being a J4, made in the last quarter of 1964, this is in even better condition and cost me just $16. I think I got a very good deal here. This is where I found them. 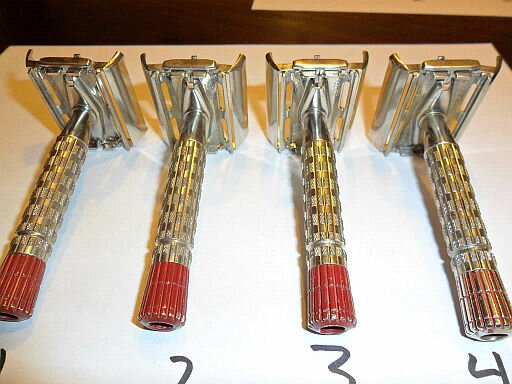