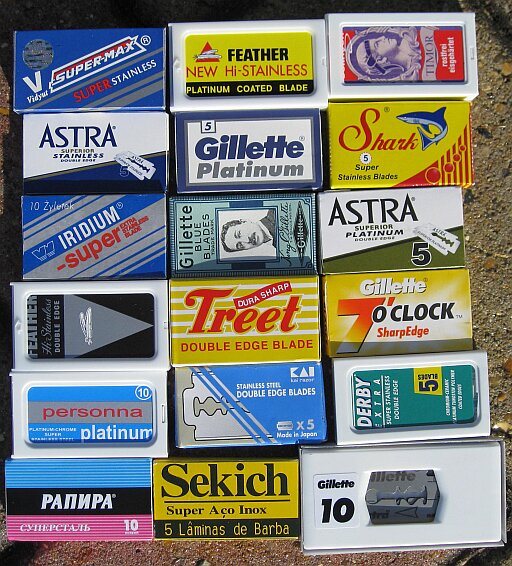 Once again this is not an academic paper, just a list of some of what is available. I have not included any supermarket own brands/re-labels. Obviously one factory can make many different brands, Petersburg Products International (PPI) for instance makes about a dozen.  Lord in Alexandria Egypt also make quite a few as do Samah in Bangladesh, Malhotra in India,  Benxi Jincheng in China and Feintechnik in Germany. It is quite easy to buy OEM blades from several different factories who will put any name you want on them, hence the plethora of obscure brands from China.

Asco. Made by Lord in Egypt.

Astra. Several different models in this brand. All from PPI.

Astor. A Bic brand for their Greek made blades.

Balaka. A Samah blade from Bangladesh.

Bic. Greek made blades from a large and well known French manufacturer.

Big Ben. Made by Lord in Egypt.

Bluebird. A second brand from Derby in Turkey.

Bolzano. Italian market blade once manufactured in Italy. Now made in Germany by Feintechnik.

Centwin. A brand of Malhotra in India who say they are the world’s largest shaving blade manufacturer.

Champion. A Samah blade from Bangladesh.

Crown. Made by Lord in Egypt.

Crystal. From the Personna factory in Israel.

Derby. Made from Swedish steel in Turkey.

Diamant. Made in Germany by Feintechnik.

Elios. Made in Germany by Feintechnik.

Kai. From Japan. Are they still in production?

Laser. A brand of Malhotra in India who say they are the world’s largest shaving blade manufacturer.

Lord. One of the big global producers of DE blades, in Egypt, under several brand names. They make razors too.

Merkur. Of Solingen, Germany. Rightly more famous for their razors.

Permasharp. These blades were originally made by a Turkish company called Permatik Celik Sanayi. Gillette bought the company and in 2003 moved production of the DE blades to PPI.

Racer. Made by Lord in Egypt.

Rainbow. Made by Lord in Egypt.

Rapira. Made in Moscow, Russia by Mostochlehmash, from Swedish steel. Also use the Ladas and Voskhod brand names.

Shark. Made by Lord in Egypt.

Sharp. A Samah blade from Bangladesh.

Shogun. Difficult to know what is going on here. The red packs look like a not very good Chinese blade. The black packs look like Chinese Feather rip-offs. Or maybe a genuine Feather sub brand.

Silver Star. Made by Lord in Egypt.

Souplex. Made by Medyna in Solingen, Germany.

Sputnik. A PPI blade for the Russian market.

Super-Max. From Vidyut Metallics Limited in India who say they are the world’s second largest manufacturer of razor blades.

Swish. A brand of Malhotra in India who say they are the world’s largest shaving blade manufacturer.

Timor. Made by Giesen & Forsthoff in Solingen, Germany.

Topaz. A brand of Malhotra in India who say they are the world’s largest shaving blade manufacturer.

Trig. A Treet brand from Pakistan.

Vijay. A brand of Malhotra in India who say they are the world’s largest shaving blade manufacturer.

Vincent. There is a Vincent razor from China. Maybe these blades are related.

Voskhod. Made in Moscow, Russia by Mostochlehmash.

Zorrick. Another brand from Vidyut in India, of Super-Max fame. You can buy these for as little as $2 per 100.

7am. A Samah blade from Bangladesh.

The Chinese situation is a little confused. It is difficult to know who is a manufacturer and who is just an intermediary, so several companies can claim to be the source of a given brand. Also several companies claim to be the biggest. Also there are lots of brands which are difficult to pin down. Also there are quite a lot of carbon steel blades that most in the West wouldn’t know how to handle. They rust if not managed properly.

If you strip the brands away back to the actual factories then it is surprising how few there are. Gillette hoovered up lots of different European brands and consolidated them into PPI, which made a big difference. The only Western European country with any diversity of manufacture left is Germany. The USA is also pretty bereft of blade manufacture.

I think a lot of what we see in this article will soon be feeling the cold chill of the Gillette Guard, companies like Malhotra and Vidyut make enormous numbers of blades and you have to wonder what their SWOT analysis is like at the moment. And of course Gillette themselves will be keen to convert their own DE manufacture over to the Guard. The Shavepocalypse is not too distant a possibility.