Real shavers have the option of using either soaps or creams. But basically creams are just soaps with added water, they are far more expensive per shave and they go off more readily with age. However they are easier to use so they are ideal for beginners.

Ultimately soaps are better, you get more of the key ingredients without them being diluted. They come in three forms, hard soap pucks, which are the real thing, soft soaps, which are half way between soaps and creams, and shaving soap sticks, which are one of the wonders of real shaving.

To use a stick you first make sure that your stubble is waterlogged. Then you rub in the soap stick like using a big crayon. Once you think there is enough on your face it is time to make a big lather using a wet brush. Personally I think this process is superior because it deposits more of the key ingredients directly on the hair follicles. Certainly it seems to cushion like no other lathering method.

But there is more to the wonder of sticks. They are absolutely brilliant for travelling and tubes to carry them are easily available. Also they last a long time, a stick costing 50 pence could last for months. But best of all some of the finest shaving soaps that you can buy come in sticks.

Here are a few:

Palmolive. The name of the company tells you the ingredients. But this time it is wrong because this stick is tallow based. It really makes an amazingly good lather regardless of price. And for what you can buy it for it is one of the bargains of real shaving, which is why I have this in my beginner’s kit. Palmolive reserve this product for the European market which infuriates American traditional shavers. 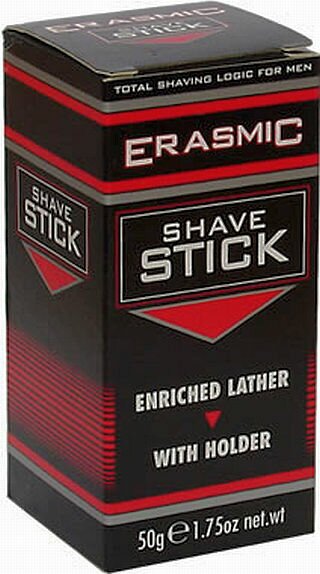 Erasmic. Another amazing soap at a bargain price, this one is made in the UK. Traditionally this was a tallow soap but just recently they moved away from this. The result was nowhere near as good and the shaving community were not impressed. Fortunately the company saw the light and moved back to the old formulation.

Arko. A famous Turkish soap that is another great bargain and which shaves fantastically. It smells quite strongly of lemons, some people think that the odour is too close to that of some toilet cleaners, so they open up new sticks and leave them for a month or so for the fragrance to evaporate off. The traditional packaging is also great, really distinctive and gets the message over.

La Toja. A slightly more expensive non tallow soap stick from Spain that is very highly rated. The full name  is “Sales de La Toja”, it is named after the island in Galicia, where the mineral springs have healing properties. La Toja started making soap sticks from the spring’s mineral salts in 1907. It comes with a ventilated travel tube which is quite handy.

Tabac. Yet more expensive, a tallow based stick from Germany.The Tabac Original fragrance was introduced in 1959 by Maurer & Wirtz and has been controversial ever since, some people like it, others don’t. What is for sure is that most people like how this stick works.

Sir Irisch Moos. Another German tallow soap that I had to include for its silly name. Maurer & Wirtz acquired the original company that made this. Nowadays it is reckoned to be just about identical to the Tabac stick, but with a far more pleasant smell.

Taylors of Old Bond Street. Luxury shaving stick available in Sandalwood and St James fragrances. In a very handy twist dispenser. And like all of the above it is very highly rated.

Valobra. Sapone per Barba Hard Shave Stick. A tallow based soap from Genoa, Italy with lecithin and vitamin E, using only the finest ingredients.

Plenty of choice there and they are well worth trying, all of them are very highly rated and do a fantastic job. None of them are excessively expensive and some of them are downright cheap. And there are plenty more to try.