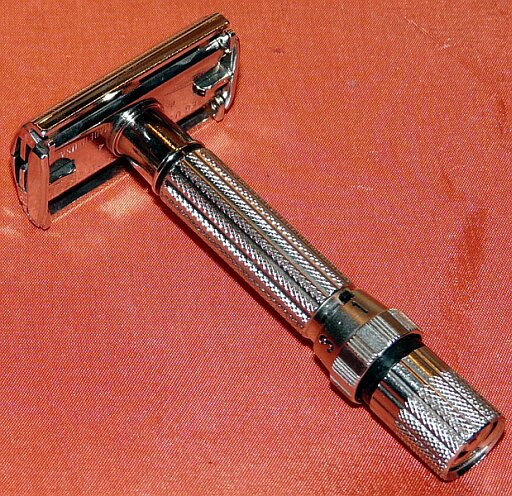 The engineering drawings here are just fantastic. This is patent number 2,952,911 filed on March 19 1956 and issued on September 20 1960, a gap of four and a half years. The inventors are Meyer J Shnitzler and Michael Douglas Benedict Jr.  As you can see the adjuster in the drawings went from 1 to 5 and in the production Fat Boy, Toggle, Slim etc it went from 1 to 9. Also the adjuster in the drawings is near the bottom of the handle just above the twist to open (TTO) knob whilst on production items it was moved to just under the head.

Gillette built a very small number of prototypes as per the patent drawing. These now are extremely valuable. There is one in the photograph above.

Another complication here is that Gillette actually had two different adjustment mechanisms. The one in the Toggle adjustable moved the guard bars. The one in the Fat Boy bent the blade to differing degrees. This patent says: “This results flows from the fact that the relative positions of the guard member is controlled by the adjusting knob”. So it looks like it isn’t the Fat Boy mechanism.

Previous Post: Storing your razors
Next Post: Chemicals you don’t want in your shaving soap or cream