Oh no, I can hear you thinking, Bruce has gone over to the dark side. But don’t worry, there is some method in my madness. The two big global system razor companies, Procter & Gamble (Gillette) and Energizer (Schick and Wilkinson Sword) make their huge profits by patenting features on their system razors which their marketing people can try and convince us are benefits. These patents give these big global companies monopolies in supplying the very expensive blade cartridges needed for their razors. But patents run out, so each of these companies is forced to bring out a succession of new models with new patents in them. Then their marketing people have to convince us that the new patented ideas are worthwhile.

Of course these marketing people are massively successful (rivalled only be De Beers and the global diamond monopoly) and many hundreds of millions of men around the world are perfectly happy to pay enormous prices on an ongoing basis for these patent protected system razor blade cartridges. In the West they are far more popular than the double edged (DE) safety razors that this blog is about. Yet the DE razor is both hugely better and hugely cheaper. It just doesn’t have the marketing billions behind it. 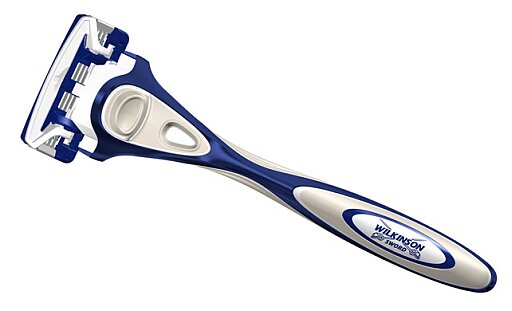 So now, in the patent cycle, the time has come for Energizer to try and sell us more new features in a brand new system razor, this one they are calling the Hydro. Inexplicably they sell this under two different brand names in different sales territories. In some places it is a Schick and in some places a Wilkinson Sword. This must cost them many millions every year in lost marketing synergies and in my opinion epitomises why they are number two and are likely to remain that way. Marketing is far more important than the product with these razors.

Part of the marketing billions is spent with PR companies, whose job it is to reach people who write in the media. And these days that means bloggers as well as conventional print journalists. Rightly so, my Bruce on Games blog had over 100,000 readers a month, so reached an audience larger than a lot of specialist print magazines do. All of which means that the PR companies employed by Procter & Gamble and Energizer have me as a target as a “shaving blogger”. If they actually read my blog they would  realise that I see them as being the dark side, which might dampen their enthusiasm. 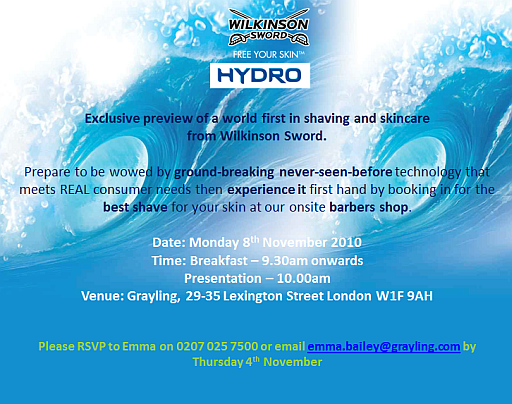 Hence I received a stream of emails from the London PR company representing the Hydro inviting me to an event: “I was just wondering if you would like to join us for our special breakfast on Monday to unveil the biggest launch in Wilkinson Sword’s history. We will also have a pop up barbers shop should you wish to try the new range and have a professional shave. The lovely Nick from Shaving Shack is coming along.”. How could I refuse?

Everyone in traditional shaving knows that the best ever Wilkinson Sword razor was the legendary “Stickie” DE, which was my first ever razor. Would this PR company have one of these for comparison? Hardly likely.

To me the defining feature of a system razor is the hinge, everything else is just marketing. The hinge is supposed to keep the angle of the blade against the face constant, which makes it easier to use. So the shaver can shave with their wrist and use long strokes. A DE shaver has to manage the angle of the blade themselves, which entails shorter strokes, not using the wrist and a brief learning curve. But it gives the shaver far more control over what the razor is doing.

So what is the Hydro all about then? What “features” have they come up with that they can patent and which their marketing people can convince us are benefits? They say the razor was 6 years under development. In this time they came up with 2 main innovative features. The first is a bump that runs along the blade just behind the edge to prevent it digging in to the skin. These are called “Skin Guards”. The second feature is the replacement of the (possibly unnecessary) lubricating strip with a small tank containing a water activated lubricating gel. This is called the “Advanced Hydrating Gel Reservoir”.

Interestingly there are two versions of the Hydro. A 3 blade and a 5 blade (handily either cartridge will work on either handle). You can see exactly what has gone on here. A lot of Gillette customers haven’t upgraded from their Mach 3 razors to the Fusion, presumably they think that 3 blades are enough. They have a point because anything more than 3 blades tends to be very clunky and the cartridges sell for even more extortionate prices. So Energizer need to compete against both the Mach 3 and the Fusion if they are to switch customers over. On the Hydro 3 packaging there is a sticker that says “Shaves Better Than Mach 3”, which gives the game away. 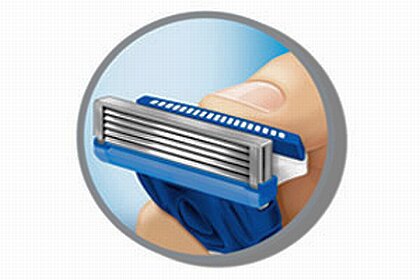 On the Hydro 5 you get the bonus feature of an “Advanced Hydrating Gel Reservoir” that clicks back to make the head less clunky. This is called the “Flip Trimmer” and is handy for allowing the blades to reach the stubble under your nose. Unfortunately clicking it back stops the cartridge hinge working, so the blade has its pivoting action hindered or stopped completely, which goes against the fundamental mechanism and philosophy of these razors.

So let’s look at the system razor market. Basically Procter & Gamble own it with the Gillette Fusion and Mach 3, they must be very disappointed that so many of their customers have stuck with the Mach 3, but they are still making big profits from them, it is just that those profits are less big than if the customers “upgraded” to the Fusion. Energizer are a fraction of the size with their Schick/Wilkinson Sword Quattro, introduced in 2003, which is a bit clunky to use. Then there is the plucky young upstart King of Shaves with their Azor razor which is fundamentally cheaper and easier to manufacture because it uses a simple hinge in the handle for its pivoting mechanism.

This makes the Hydro a critical product. They could end up as the meat in the sandwich between the more expensive Fusion and the cheaper Azor. Or they could take market share out of both. When the Hydro was launched in America it had a brief honeymoon as the best selling razor in the market. However this party was soon rained on when Gillette launched (with a massive budget) a new version of the Fusion with more “features” called the ProGlide. In the UK the ProGlide will be launched early next year in what Procter & Gamble are promising will be the biggest consumer launch of the year. So for every pound that Energizer have spent marketing the Hydro, Procter & Gamble might spent five pounds marketing the ProGlide. And when it comes to shaving the customers buy what the marketing people tell them to buy, so this bigger spend will be everything. And of course the reason they have so much marketing spend is because of the huge profitability of those patent protected multibladed cartridges. The shaver pays for all those TV adverts and celebrity fees every time they shave.

Now I thought I would do something radical and look at the real technology of these razors. Gillette use a simple pin pivot just behind the razor head, Schick/Wilkinson pivot using a semi circular track which puts the pivot point somewhere about the surface of the skin. This latter mechanism has to be better because the head is more free to follow the face’s profiles. The Azor uses a handle hinge so the cartridge moves through an arc, rather than a pivot, which to me looks a less pure, but cheaper, engineering solution. Not that you need any pivot at all as billions of double edged shavers have proven over the last 100+ years.

The next big difference is that the individual blades on the Fusion and the Azor are mounted on springs, so move up way from the cutting zone when subject to any pressure. When you consider that these blades have zero exposure and are buried within a plastic cartridge it strikes me that this could be counter productive, it could work towards preventing the blades from actually giving a close shave. Schick/Wilkinson Sword on the other hand mount their blades rigidly and rely on their “Skin Guards” to make their razor as foolproof as their competitors’ razors.

So if these multibladed cartridge based system razors are a good idea, which to me is a dubious proposition, then Schick/Wilkinson Sword seem to have technological superiority in two very key areas. All in my humble opinion, of course.

Now we come down to what they are like to use. I lathered up using a brush and Williams shaving soap then used the Hydro 3 on one side of my face and the Hydro 5 on the other side of my face. As you would expect from system razors they were ridiculously easy to use and very, very fast with no sign of even the slightest razor burn or nicks. A Chimpanzee could easily use one of these. They both clogged up very quickly and needed frequent rinsing, just like all multibladed razors.

The “Advanced Hydrating Gel Reservoir” was a bit too much, making the face all gloopy, other users report that it is more successful with the lower grade lathers you get with an aerosol gel or foam. And it didn’t work till it had a couple of seconds exposure to moisture, so it would be best to dip the razor head in the water before using it. There was no noticeable difference in the efficacy of the Hydro 5 over the Hydro 3, just that the 5 was a bit more clunky to use. As ever with a system razor the shave was not particularly close so I lathered up again and finished the job off with my Eclipse Red Ring, a 70 year old double edged razor.

Energizer are taking advantage of their huge investment in launching the Hydro brand to piggy back a whole range of men’s grooming products. Two aerosol gels (sensitive and moisturising) and a foam, and of more interest to the traditional shaver a shaving cream and a balm. However the cream contains Methylparaben, Propylparaben and Triethanolamine whilst the balm contains all three of these plus Ethylparaben. I have written about these chemicals before.

So who are the Hydro 3 & 5 razors for? Anyone who wants a quick and easy (but not the best) shave who is prepared to shell out a fair bit of money every year on multibladed cartridges. So that is most men in the developed world. Of the available system razors it is probably the best of the bunch just now. The Hydro 3 is the better of the two because it is less clunky and is cheaper to buy and run. But obviously I would recommend that anyone climbs the short learning curve to use a double edged razor instead.

And what am I going to do with my freebie Hydro razors? I keep a Gillette Mach 3 in the shower for shaving bits that aren’t my face. It looks like the Hydro 3 may replace this as it seems to be the better razor. A bit more comparison is needed first, though. The Hydro 5 will be kept for when I need a passable, high speed shave and haven’t the extra couple of minutes needed to do it properly with a double edged razor.