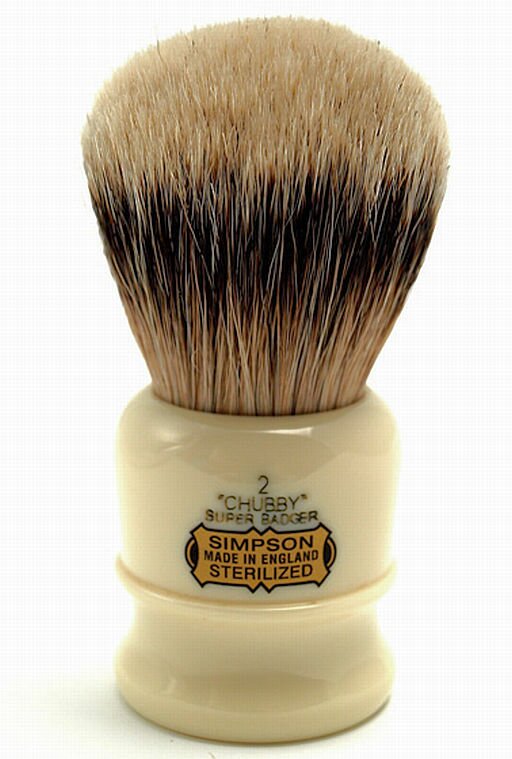 Simpson’s shaving brushes are amongst the finest in the world, possibly the finest. And today they are one of the very few traditional British shaving brushes actually made in these islands. With over 20 models, some available in different sizes and many available in a choice of the three different hair grades (pure, best and super), the Simpson’s range offers an amazing choice.

Originally a Simpson’s brush was something for the very elite in society, the outlay to buy one represented a big chunk of the average wage. However over the decades people have become materially richer and so these top end prestige brushes have come within the purchasing power of almost everyone. In fact a Simpson’s brush nowadays makes such a small dint in the average person’s disposable income that many traditional shavers have several of them.

A. Simpson & Co was set up in 1919 by Alexander Simpson, a Scotsman, in the East End of London. The business prospered and, in 1924, moved to Clapham where the business grew further and won awards. In 1941 the factory was destroyed in the German bombing of England and so the business moved to safe refuge in Somerset where they shared Nimmer Mill, a watermill which drove the machinery, near Chard with Coates.

In the early 1990s recession the company went bankrupt and was bought by David Carter and Francis Woodhouse who moved it to a more modern factory in Yeovil then, due to retirements, the company was sold to Vulfix on the Isle of Man in 2008, where the brushes are made today in Simpson’s fifth home.

A Simpson’s brush is handmade. The badger hair is sorted and then tied by a craftsman to make a knot, this is glued into a handle that has been hand turned on a lathe and then polished. They are made much more densely than most other brands of brush and if rinsed well after use and then allowed to dry with the bristles facing down should give around 30 years of daily service. After that you can have it refurbished with a new knot in the old handle.

Originally the brush handles would have been mainly bone and ivory (but also out of many other materials including solid gold) but when the thermosetting polymer Catalin was developed in the 1930s, this largely took over. Catalin is as hard as brass and takes a fine polish, however over time the surface oxidises and becomes yellow. This colouring in old shaving brush handles is known as “butterscotch” and is very highly valued. Today more modern plastics are used for new production.

Next we will be talking more about the brushes themselves.