Here are some more of the early Gillette advertisements that I have scanned in. The first three look like quarter page adverts from Punch magazine from before World War 1.

The first is exhorting, presumably womenfolk, to buy men razors for Christmas, a bit brave of Gillette when giving a blade as a gift is traditionally bad luck. This razor as gift concept obviously worked because it is not uncommon to come across totally unused vintage razors, especially travel sets. The men presumably put the gift in the draw and continued using their old razor. Ingraining this gift concept in the collective conscience was good marketing because it reached new customers who would then be forced to buy the expensive patented blades for posterity. 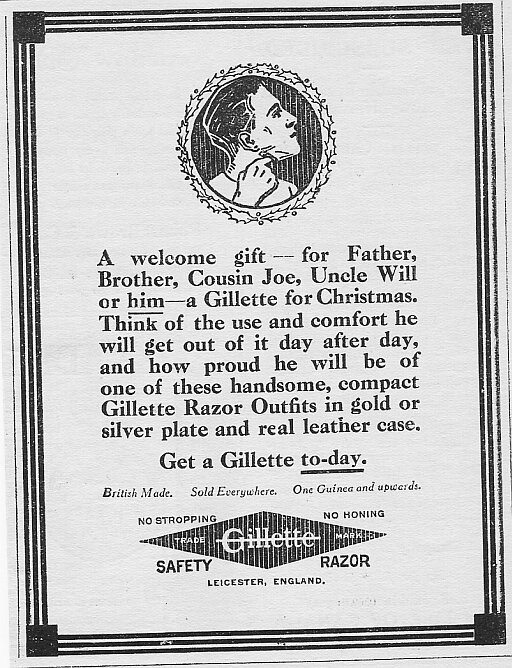 The next advertisement is another dig at the cut throat razor and the use of barbers. It is telling men to shave themselves and is telling them how much more convenient it will be, how presentable they will be after just three minutes with a Gillette razor.

This third advertisement is getting closer to a true product advert. They use the left hand side to trumpet the superiority of the safety razor with some features and benefits whilst having veiled digs at the competition. Then the right hand side has the product, and for the first time the price. And what a product, triple silver plated in a Morocco box at the immense price of a guinea, or 21 shillings, this is not aimed at the mass market. 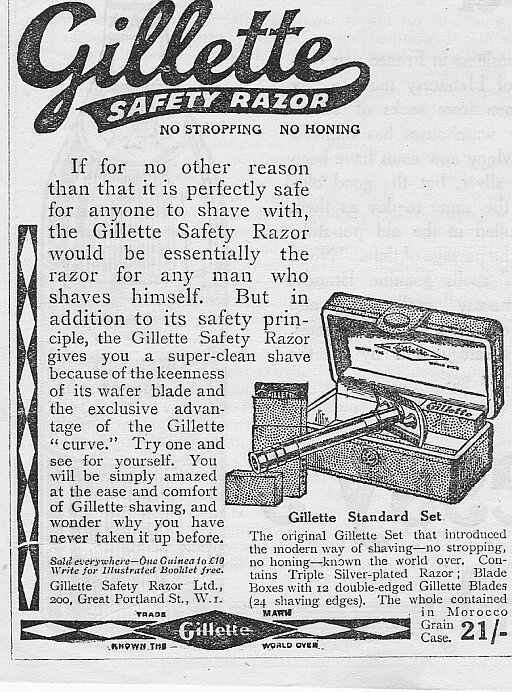 Finally we have a much later advertisement and from a different periodical. From the Sketch in Christmas 1926. You can see that this is a much more sophisticated advertisement. Once again they are banging on about the Christmas present angle, just like De Beers banged on about buying diamond engagement rings. And it worked for both companies. Even today you see big Christmas gift packs of system razors appearing at retailers in Q4 each year. One very nice point is that by 1926 they have a royal warrant. By Appointment to His Royal Highness the Prince of Wales. That would be the very clean shaven Edward Albert Christian George Andrew Patrick David Windsor, who 10 years later as Edward VIII abdicated as king. There was no royal warrant to the king in 1926 because George V, Edwards father, supported a very fine beard and an even finer moustache.