Rooney shaving brushes are a riddle wrapped in a mystery inside an enigma. They do not publicise their physical address and contact details and they have no proper website. Yet several retailers sell extensive ranges of their expensive shaving brushes, sometimes under the Rooney name and sometimes with the name of the retailer on them. I have an old butterscotch brush that was originally sold by Boots in England which is almost certainly a Rooney.

Shaving brushes have been made and sold with the Rooney name for over 300 years (over 200 years made in England, another century or so before that in Brownville, Galway, Ireland) and they have been some of the best and most expensive brushes available. The absolute epitome of classic English shaving brushes. In recent times they have been experimenting with different ranges (all handmade in England with the knots handmade in England), which widens their appeal to shavers and gives collectors more to buy. The Heritage range is even more classical than their already classical standard range. 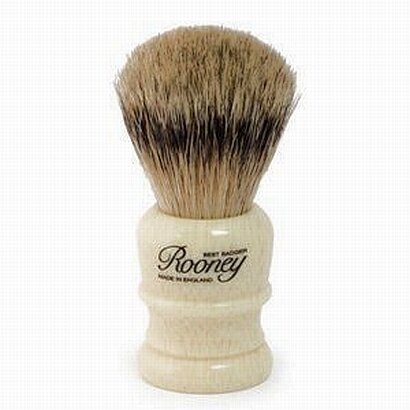 But now they have suddenly come over all psychedelic with a range of brushes that you need sunglasses on to look at. The handles have been turned out of some very interesting rods, the shapes and the colouring working together to bring something very new and different to the shaving world. You can buy them here. These have only been made in very small quantities.

It just so happens that I was able to buy a couple of Rooney prototypes, one of which which is closely related to this new range. This brush was described thus: Super Badger shaving brush. Hand made shaving brush prototype made by a large British brush maker. Real great face lathering, nice and dense.

Rooney Super Badger is a specific grade, it is Silvertip hair that has been re-graded and re-dressed in England. To do this the badger hair is sorted and short and twisted hairs are removed, leaving the hair softer and whiter, which gives the brush better water holding and lathering capabilities. The knot is then made (in England) using confidential proprietary techniques that have been handed down over the years and which make Rooney brushes unique.

The second brush is also Super Badger but with a shorter loft and a transluscent pearl handle with a chromed base.

So what are they like to use? Both of these brushes have extremely dense knots that pretty much define them. To pack so much very fine, high quality silvertip hair into a knot is a recipe to give it a very large capacity indeed. And so it proves, lift either of these out of a bowl of water and they are surprisingly heavy with the sheer weight of water they have picked up. They both load up very easily and both release their lather very easily. They hold enough for a lot of passes, they still look pretty full of lather after three. So your consumption of cream or soap is going to go up if you use one.

Where they differ is on the face. They are both ultra soft mops that initially feel like they have no backbone, but press them in and the sheer density makes itself felt. The candy stripe is by far the bigger mop and splays a whole lot further before you hit that backbone. Any bigger and you would be using it to paint rooms. Because it has a smaller knot and splays less the chrome bottomed brush paints a narrower path across your face, but this is no Wee Scot, it still has a lot of hair and a lot of lather.

In conclusion it is always nice to own something “one off” that is totally unique. To own an exclusive, prototype shaving brush by one of the world’s leading manufacturers is a bit special. To have been lucky enough to be able to buy two was a fantastic opportunity.

Disclaimer: I bought and paid for both of these brushes.