It strikes me that in a traditional wet shave with three passes each of those passes is doing a different thing. In the first pass most of the hair is removed, so this requires a razor that really munches through the stubble effortlessly. In the second pass a fair amount of hair is still being removed but there is more across the grain (XTG) and against the grain (ATG) work so this requires a razor that is very smooth yet still able to remove a lot of hair. The third pass is touch up and putting a finishing touch to things so a nice mild razor is needed.

Now some would say this is what an adjustable is for, just click it down between the passes. And yes, I have done this and it works with my Mergress and my Gillette adjustables. But by going for different razors you are going for more than just a change in blade exposure, you are going for a change in the whole feel and action of how the razor works. So the three razor method has to work better, it is just a matter of choosing the right razors. 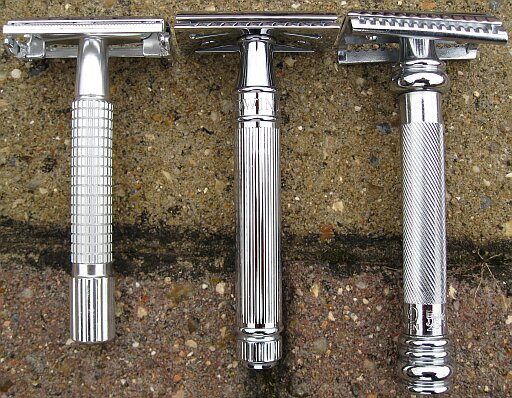 For the first pass the obvious choice of razor has to be the Merkur 39C Slant Sledgehammer. There can’t be much that is more efficient at removing stubble, the scything action of the slant bar goes through anything you can offer up with consummate ease. And yet, surprisingly, it isn’t an aggressive razor to use. An alternative to the 39C as a pure whisker muncher would be the Mergress turned up to 4 and a bit. But between the two I think that the 39C is the better tool for this job.

The second pass is the perfect place for the Edwin Jagger DE89L, since it came out this razor has won many friends for its all round ability. It is recommended to beginners as a starter razor because it doesn’t bite, yet at the same time it is an efficient cutting tool that all shavers should be able to appreciate. This is just perfect for going XTG and ATG. An alternative would be the Merkur 38C Barber’s Pole, another fine razor. But owning and using both of these the Edwin Jagger shades it.

The third pass has to be the natural home for the Weishi razor from China. You would have to try very hard indeed to get this lightweight Super Speed clone to cut you, it is so benign. Yet when you get the angle right (and with this razor angle really is critical) then it is still a masterful piece of shaving equipment. I don’t know any other razor that behaves like this. Which means it is just perfect for touching up, you can go after those difficult patches with no danger of causing weepers. Alternatives would be a vintage Super Speed or a vintage Tech, but really the Weishi is better. 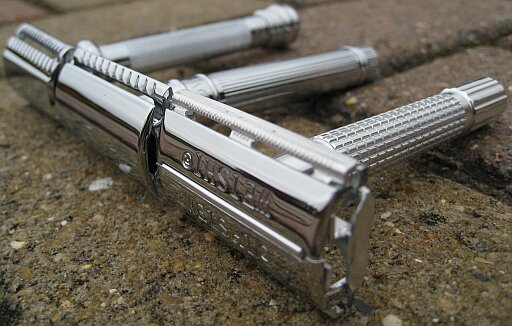 Now the big thing about traditional shaving is that all the choices are down to the individual (not to some massive multinational “personal products” conglomerate) so you may disagree strongly with my choice of razors. Feel free to do so because that is part of the fun and enjoyment. However I feel that the principle of three different razors for three different jobs carries some weight and is worth experimenting with.

So putting theory into practice does it work? The answer is as an unequivocal yes. The 39C likes a sharp blade in it for its action to work and it certainly removes most of the hair in just one pass. The DE89L is less blade sensitive and smoothly gets rid of virtually all the rest. You could stop now after 2 passes. But for the best shave the Weishi pass makes a big difference and you can buff the problem areas in a way that would be impossible with a more aggressive razor.

The net result is a very quick and efficient transformation from stubble to smoothness. Not only is it quicker but it has less impact on the skin. The method causes less trauma. For someone with sensitive skin this would be a winner.

From a practical point of view you can either use one blade and switch it or you can use 3 separate blades. I shave in the shower which makes the blade change interesting, to put it mildly. But having three blades out triples the amount of time they are exposed to a wet environment.

Of course it isn’t just the razor that is involved here. You could also go for a three different razor blade method. For the first pass you could use a Kai or a Feather, then for the second pass an Astra or an Iridium (if you are one of the lucky ones) and for the third pass a Personna or a Derby. Or you could go for some combination of razors and blades. Or experiment by mixing and matching till you get what suits you.